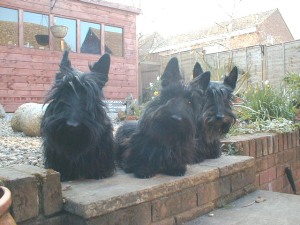 Agnes was our first Scottie. She joined me in 1991 and ever since I have been devoted to this breed. She gave us many happy memories and produced some wonderful Scottie puppies that I am sure have filled their new owner’s lives with the same happiness. She departed from us in December 2002 but she is never far from our thoughts. She was the typical Scottie: Stubborn, anti-social with guests (she would say her “hello’s” then retreat to our bedroom and spend the rest of the evening there!) bold, courageous but never, never aggressive.

Isobel joined us in 1997.  She matured into a wonderful Scottie but retained her playfulness. The house was strewn with her toys. She produced three litters of wonderful Scotties, nearly all of the families remained in contact with. Izzy sadly crossed the Rainbow Bridge in February 2009.

Kelpie, born in February 1999 was one of Isobel’s first “daughters” and we decided to keep her. She was a very different Scottie to Izzy, preferring to sit on my lap than play with the toys. Both Izzy and Kelpie enjoyed their walks and I’m sure would walk directly back to Scotland in one day if allowed to! Kelpie had her own Scottie “babies”, one of whom we still see regularly. Kelpie too, sadly crossed the Rainbow Bridge well before time in June 2008.

We now have the pleasure of living with:
Finlay and Bobby are the last litter of Scotties born to Izzy in February 2003, together with two other boys. We decided to keep these two and try our hand at Showing. Unfortunately for Bobby he was he one selected first. Finlay followed later. You can read briefly about their foray into the show-world further within our website.

We have since been joined by Gus, one of Izzy first pups. He was bought by my parents who too have sadly passed on and Gus has returned to live in the bungalow in which he was born. He is now 11 and a half, and still enjoys a sturdy ramble over the fields with his younger brothers!

One thought on “Our Peeps Scotties”